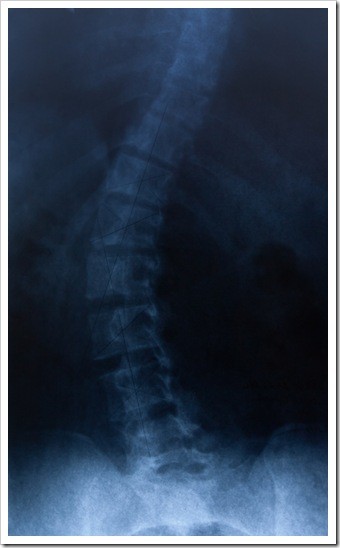 Flashback from the eighties – a girl is wearing a full back brace for scoliosis and trying to get a sip of water from a drinking fountain.  At the time it was painfully funny and not so far fetched.  Unfortunately, the event was even more real for the 5 to 7 million people in the United States, especially girls between the ages of 10 and 15, who suffered from the curvature of the spine and the burdensome prevalent treatment of the time. Thank goodness! Times and advanced technologies have changed in the way we can treat the curvature of the spine known as scoliosis.

Scoliosis is a general term that is used to describe a progressive lateral (sideways) spinal curvature which is greater than 10% from the vertical that can affect the entire skeletal system including the spine, ribs, and pelvis.  Less than 10 degrees may be the result of postural changes.

Most people do not know that the condition of Scoliosis is divided into two categories: idiopathic and functional.

Idiopathic scoliosis often involves changes in the development of spinal bones, where the healthy development of a spinal vertebra should be more square.   The spine with idiopathic scoliosis may be trapezoidal (shorter on one side as compared to the other).  Eighty percent of the time, the cause of this type of scoliosis remains unknown.  In other cases, the condition will be the result of some form of trauma, neurological disease, tumor, or similar. With patients with significant changes in bone structure, it is impossible to correct this type of spinal curvature.  However, case management of the scoliosis is equally essential.

Functional scoliosis patients will show normal development of the bony structures of the spine and the orientation of the vertebra tends to be within the normal ranges of movement. Most often the curvature in the spine was created by postural shifts, muscle spasms, or leg-length inequality.  This type of scoliosis responds extremely well with chiropractic care and can often achieve a full correction. Most importantly, identification and diagnosis of scoliosis early are imperative for the best corrective outcomes and as it can affect virtually every system of the body.

Scoliosis can cause pain, and impair lung or heart function.  It can also lead to psychological problems such as poor self-esteem, especially because it so often happens at an age when peer pressure is at its most powerful. With 4 out of 5 scoliosis sufferers, the spinal curvature is less than 20 degrees, and this is not normally visible to the untrained eye.  Provided these cases do not appear to be worsening; there is no great cause for alarm.  However, as children and adolescents have bodies that are still growing, mild curvatures can bend by a further 10 degrees or more in a matter of months.  For this reason, evaluations should be made frequently.  These evaluations are extremely important for pre-pubescent girls with a curvature of at least 25 degrees, who have not yet menstruated for the first time.  As there is relatively fast growth in the year before the first period, it follows that any curvature will also progress quickly.  After the first period, this progression of the spinal curvature slows down but will take longer to correct as each year passes.

Scoliosis is evaluated by conducting a detailed family history and a physical examination that includes a postural analysis. If abnormal curvature is detected, further investigation is required to establish if there is any obvious cause of the problem, such as congenital malformations or any prior injury.

X-rays are a useful tool for thoroughly investigating the structure of the spine. In this case, an x-ray can help give not only the condition of the spine itself but highlight any impingements the abnormal curvatures may be causing to critical nerve roots that branch between each of the vertebrae.

Today the treatment option which is showing the most promise is a combination of spinal adjustments or manipulation, therapeutic exercise, and other 21st-century technologies.  These can be especially helpful to anyone whose scoliosis is causing them spinal pain such as lower back pain, neck pain and also headaches.  Generally, exercise is both advocated and well-tolerated for patients with scoliosis.  Most importantly, it should be remembered that most people who have scoliosis lead their lives no differently to anyone else, however, as their spine is exposed to increased levels of strain mechanically it is important to ensure that extra efforts are made to help keep the spine healthy.  Chiropractic care is a leader in the field of a great method of ensuring spinal health.

Our expert team led by a qualified chiropractor has been created to work with patients that have scoliosis to achieve improved health overall while addressing the curvatures, impacts on the body and the root cause of the condition rather than just correcting the abnormal curvature. This holistic approach has shown the greatest results in long term success in managing and correcting scoliosis.  Be sure to discuss with your chiropractor the various methods which are available for improving scoliosis to find the method that will work best for you.