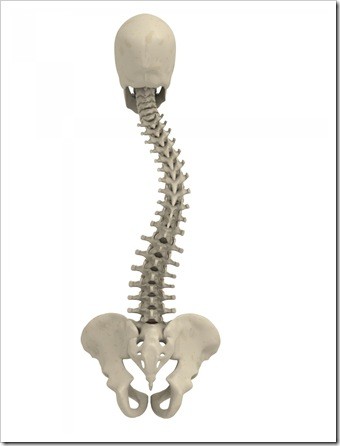 Scoliosis is a spinal condition which affects between five and seven million people in the US alone, most often adolescents between the ages of 10 and 15, and more commonly girls, although it can affect any age. Over half a million visits to the doctor are made each year to either evaluate or treat scoliosis. As the condition can be inherited, a history of it occurring within a family, or current cases, should lead to evaluation of all the children by an appropriate professional.

Scoliosis is a lateral (sideways) curvature of the spine where that curvature is greater than 10% from the vertical. Less than 10 degrees may simply be the result of postural changes. Although the nervous system works to keep your spine straight, problems can occur. Scoliosis may not exist in isolation, and lordosis (abnormal curvature toward the front) or kyphosis (abnormal curvature toward the back) may also be present. The vertebrae are also often rotated.

80% of the time, the cause of scoliosis remains unknown, and this is called idiopathic scoliosis. In the other cases, the condition will be the result of some form of trauma, neurological disease, tumor, or similar. Where postural problems, muscle spasms, or leg-length inequality cause the condition, it is known as functional scoliosis, and can often be corrected. Structural scoliosis, on the other hand, is not reducible with postural changes.

Scoliosis can cause pain, and impair lung function or heart function. It can also lead to psychological problems such as poor self-esteem, especially because it so often happens at an age when peer pressure is at its most powerful.

With 4 out of 5 scoliosis sufferers, the spinal curvature is less than 20 degrees, and this is not normally visible to the untrained eye. Provided these cases do not appear to be worsening, there is no great cause for alarm. However, as children and adolescents have bodies that are still growing, mild curvatures can bend by a further 10 degrees or more in a matter of months. For this reason, evaluations should be made frequently.

Scoliosis is evaluated by conducting a detailed family history and a physical examination that includes postural analysis. If a curvature is detected, further investigation is required to establish if there is any obvious cause of the problem, such as a birth defects or any prior injury

X-rays are a useful tool when the curvatures are pronounced, to check more thoroughly on the structure of the spine, and if the scoliosis is impinging upon anything else. The wrist is also often x-rayed because this is used to assess the patient’s skeletal age, as a barometer of where that person is in relation to the accepted norm, and for monitoring the progression of the condition. X-rays may be needed anything from once every 3 to 4 months, to once every few years, depending on the doctor’s feelings about the possible rate of progression.

A device called a Scoliometer can be employed to monitor progression once diagnosis is certain. This measures changes in the rib humps that are linked to scoliosis, and is painless, being a non-invasive technique.

The vast majority of scoliosis cases are mild, non-progressive, and there is no need for treatment. This is not true for one category, though, which is young girls with a curvature of at least 25 degrees, who have not yet menstruated for the first time. As there is relatively fast growth in the year before the first period, it follows that any curvature will also progress quickly. After the first period, this slows down.

Traditionally, scoliosis is treatable in three ways: observation, bracing, and surgery. The first option is the most common and is not really a treatment because nothing is actually done to the sufferer, for the reasons outlined above regarding its usually non-progressive state. Bracing is normally only applicable to children whose skeletons have not fully matured whose curvatures are between 25 and 45 degrees. In progressive cases beyond 45 degrees, and/or if the function of the heart, lungs, or other vital organs may be affected, surgery becomes an option.

Today the treatment option which is showing the most promise is a combination of spinal adjustments or manipulation, therapeutic exercise, and electrical muscle stimulation. These can be especially helpful to anyone whose scoliosis is causing them spinal pain such as lower back pain, neck pain and also headaches. A general piece of advice, exercise is both advocated and well-tolerated for patients with scoliosis. Most importantly, it should be remembered that most people who have scoliosis lead their lives no differently to anyone else, however, as their spine is exposed to increased levels of strain mechanically it is important to ensure that extra efforts are made to help keep the spine healthy. Chiropractic care is a great method of ensuring spinal health.